The conference "Machar" ("Tomorrow"), organized by the Jewish community in Montenegro, member of the Euro-Asian Jewish Congress (EAJC), took place in Budva on October 23-26. The event was held under the patronage of the EAJC. 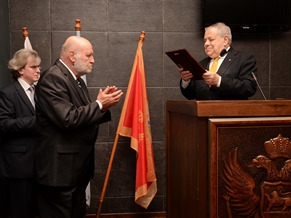 Conference was opened by the President of the Jewish community in Montenegro Yasha Alfandari. Minister of the Government of Montenegro for Human and Minority rights Suad Numanovich and EAJC Secretary General, Vice-President of the World Jewish Congress, Mikhail Chlenov welcomed the participants. Natalia Schmidt, the EAJC CEO delivered a message of the EAJC President Julius Meinl to the Conference.

In his letter President Meinl expressed his deep appreciation to the community of Montenegro and its leader Yasha Alfandari for their efforts in organizing such a large-scale forum. Welcoming the representatives of the Balkan Jewish communities who have joined the EAJC, Julius Meinl, in particular, wrote: “I am very proud that in less than a year of my serving as EAJC President the Congress geography has greatly expanded, and this continues the story of the successful building of our Congress. Together with you we are executing the most important strategic goal – integration of the small Jewish communities into the World Jewry. This goal has been set at the moment of establishment of the EAJC. And today, looking at the map, we are pleased to state that we are complying with this mission.”

“With you, the representatives of Balkan Jewry, our position in the Jewish World becomes much stronger, and I want to emphasize that for EAJC – in terms of its activities – there are no big or small communities, for us the center of our activity is everywhere, and peripherals – nowhere”, noted the EAJC leader. “We all are looking forward to the Eurasian Jewish tomorrow not just with hope, but with confidence. Together with the World Jewish Congress, together with the State of Israel, the Euro-Asian Jewish Congress will continue its work for the benefit of the Jewish people”, Julius Meinl stressed. 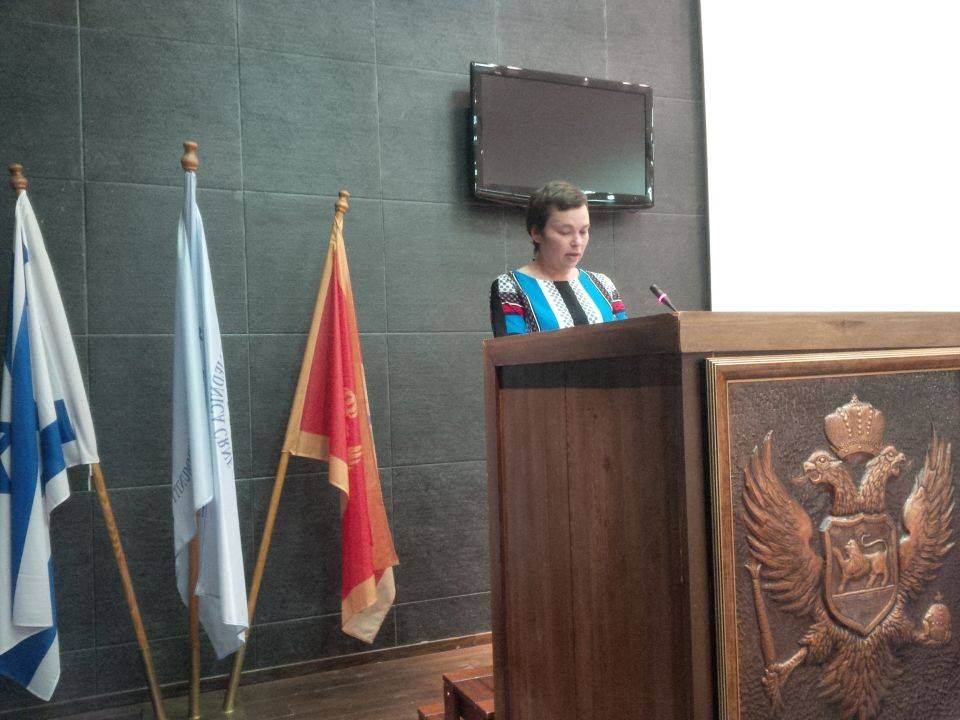 At the opening ceremony, Mikhail Chlenov solemnly handed Yasha Alfandari the highest EAJC public award – "Medal of Merit" “for outstanding efforts in building the Jewish community life in Eurasia"", as it was noted in the diploma. 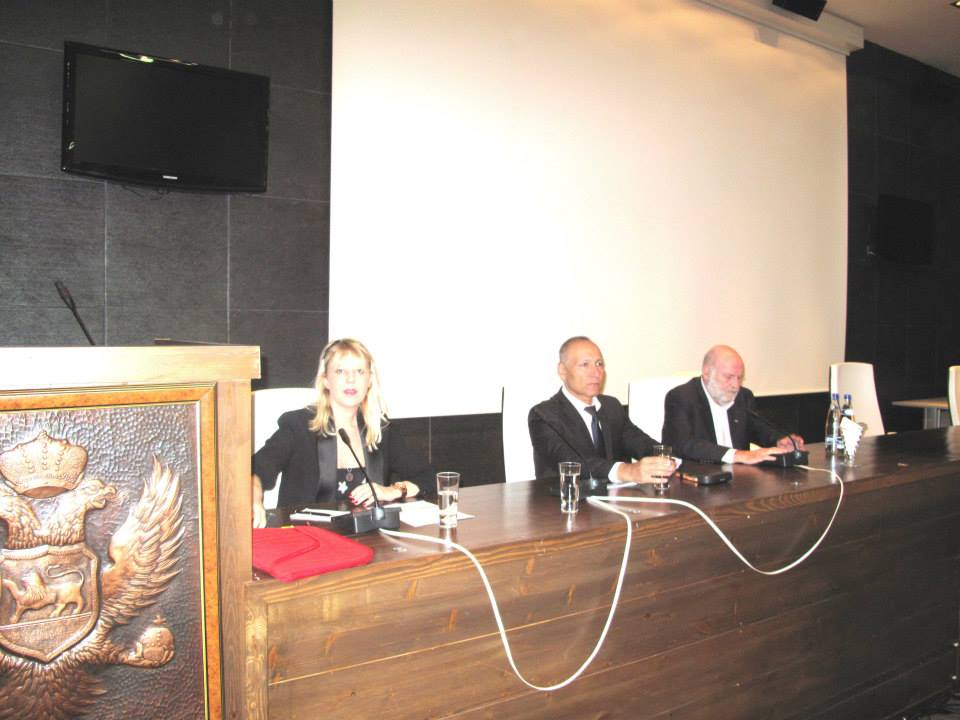 During the four days of the Conference representatives of the Jewish communities of the Western Balkans took part in a number of meetings and "round tables", met with the Ambassador of Israel to Serbia and Montenegro Yosef Levy, jointly celebrated Shabbat. During the event hearings on anti-Semitism; countering assimilation; leadership in the Jewish community; repatriation from European countries were held. Panel on the problem of anti-Semitism in Europe was led by the Advisor of President of Montenegro prof. Sonja Tomovic-Sundich and prof. Mikhail Chlenov, who spoke about the situation with anti-Semitism in Russia and Ukraine.

Dvadeset i prvi maj, u Beogradu

Balkans: “Antisemitism 2.0” in the light of Historical Revisionism and Prague Declaration

This speech was given at the Second Moscow International Conference on Combating Anti-Semitism, Racism and Xenophobia “Protecting the Future ” , October 2018. Godwin’s Law “on speed” Two weeks ago, the cover page of a pro-establishment Serbian daily, displayed a photograph in which Milo Đukanović, president of neighbouring Montenegro, is photoshopped to look like

“I was never crazy about Hitler... If you stand on a soapbox and trade rhetoric with a dictator you never win... That's what they do so well: they seduce people. But if you ridicule them, bring them down with laughter, they can't win. You show how crazy they are.” Mel Brooks U mnogim analizama Ekoovog romana “Ime ruže” (čija je srž nepostojeća Aristotelova Druga knjiga Poetike , posvećena komediji i smehu) možemo pročitati zašto je i

“Oh really?! And how was it?” – I get this question from none of my friends when I say that I’ve visited Auschwitz-Birkenau concentration camp. “I went to Auschwitz” On the other side of the table is just silence, a distracted stare. My usually bubbly friends now seem like the people who don’t know what they are allowed to say, or how to behave. “I deal with that every day”, I continue. “You can ask whatever you want.” Nothing. No

Jelena Djurovic: "You cannot be half pregnant. The same goes for being Jewish"

Originally published on worldjewishcongress.org on 19 Nov 2015 Meet Jelena Djurovic: Journalist, local politician in Belgrade and vice president of the Jewish community in Montenegro. She commutes between Belgrade, Serbia and Podgorica, Montenegro and wears all of her professional hats with diligence and expertise. She is a pillar of the Balkan Jewish community, but like

Dangers of Historical Revisionism in Serbian Media and Academic Circles

(This speech was given at the conference "Representation of the Holocaust in the Balkans, in Arts and Media" , October 2014 - Belgrade, Serbia) I was announced here as a representative of the Jewish community of Montenegro, which is true, since I was one of the founders of this youngest Jewish community in the world. As I have lived in Belgrade most of my

“This instrument can teach”

"There is no conflict between the ideal of religion and the ideal of science, but science is opposed to theological dogmas because science is founded on fact. To me, the universe is simply a great machine which never came into being and never will end. The human being is no exception to the natural order. Man, like the universe, is a machine...In the course of ages, mechanisms of infinite complexity are developed, but what we call "soul" or "spirit," is nothing more than the sum of the functioning’s o

Antisemitism in the 21st century

( A lecture by Jelena Djurovic given at Limmud Keshet conference, Montenegro, november 2013.) If the Jew did not exist, the anti-Semite would invent him. Jean-Paul Sartre, Reflections on the Jewish Question , 1945. Introduction At the beginning of this lecture, which focuses on contemporary antisemitism as its ma

Christopher Hitchens passed away on 15th of December 2011. Here are some of his best quotes. We miss you, Hitch. Some photographs (two, four and five) were taken by Jelena Đurović, editor-in-chief of Agitpop.me, during summer of 2013. Wyoming Apartments is an historic apartment building, located at 2022 Columbia Road. George Stephanopoulos, Christopher Hitchens and Dwight D. Eisenhower lived there. Yes or No - Letter B Hitchens addresses a

“The privilege of opening the first trial in history for crimes against the peace of the world imposes a grave responsibility. The wrongs which we seek to condemn and punish have been so calculated, so malignant, and so devastating, that civilization cannot tolerate their being ignored, because it cannot survive their being repeated. That four great nations, flushed with victory and stung with injury stay the hand of vengeance and voluntarily submit their captive enemies to the judgment of the law is one of the most significant trib

Such a shame, to believe in escape (Number me with rage...)

"If there is any town this world would be better without, this is it."

“Apparently proud of their endeavors, the Scorpios recorded their war adventures, and made it possible to rent the tape from a video store in the Serbian town of Sid, from which most of them came. Needless to say, it is a ghastly document: the Scorpios unload the men from a truck; they beat them and curse their Muslim mothers; the men are terrified, their faces bloody; they lead them up into the woods. Then it all goes fast. The men put up no resistance, for they are exhausted and hopeless. The Scorpios shoot them in the back, o

Tekst objavljen u magazinu FAAR broj 008, Februar/Jun 2011, urednik: Bogomir Doringer, tema: Faceless “This city is afraid of me. I have seen its true face. The streets are extended gutters and the gutters are full of blood and when the drains finally scab over, all the vermin will drown. The accumulated filth of all their sex and murder will foam up about their waists and all the whores and politicians will look up and shout "Save us!"... and I'll look down and whisper "

Victim of the crime - Phoenix

All I need is everything - Aztec Camera

Gordon Braunu Aušvicu: The Prime Minister has said that his visit to Auschwitz-Birkenau concentration camp was a reminder that everyone has a duty "to stand up against discrimination and prejudice". Gordon Brown toured the site of the former camp during a visit to Poland and signed the visitors’ book. He also wrote a message in the book. "What I have seen this afternoon is a harrowing testament to the murder of so many who suffered here the extremes of terro